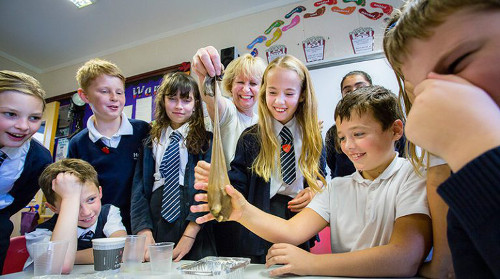 For many teens, seeing a 3D printer build, layer by layer, the design they just completed on a nearby laptop is an awe-inspiring experience. These days, members of Imperial College London’s outreach team, armed with 3D printers and robots, are frequent visitors at neighborhood festivals in London’s White City neighborhood, where the college is building a new 23-acre campus.

White City is characterized as among the 10 percent most disadvantaged areas in the UK, with an unemployment rate twice the London average. As part of its commitment to the regeneration of the local area, Imperial’s community engagement team, led by Dr. Maggie Dallman, Associate Provost of Academic Partnerships and Professor of Immunology, is looking to excite the creativity and wonder of local young people by creating a unique space called “The Invention Rooms” for community-driven innovation. Located on a busy thoroughfare in west London, this space will comprise a series of workshops and public interaction spaces.

Within The Invention Rooms, a new Reach Out Makerspace will enable local young people ages 14 to 18 to create new prototypes based on their own ideas through a series of “maker challenge” programs.

Co-producing science for sustainability: Can funding change knowledge use?
Leadership: Insights from Irina Bokova, former Director-General of UNESCO, Board member of the Ban Ki-Moon Centre for Global Citizens and visiting lecturer
A vulnerability analysis: Theorising the impact of artificial intelligence decision-making processes on individuals, society and human diversity from a social justice perspective
Effects of sexual harassment on advancement of women in academic medicine: A multi-institutional longitudinal study
Chinese trends in adolescent marriage and fertility between 1990 and 2015: a systematic synthesis of national and subnational population data