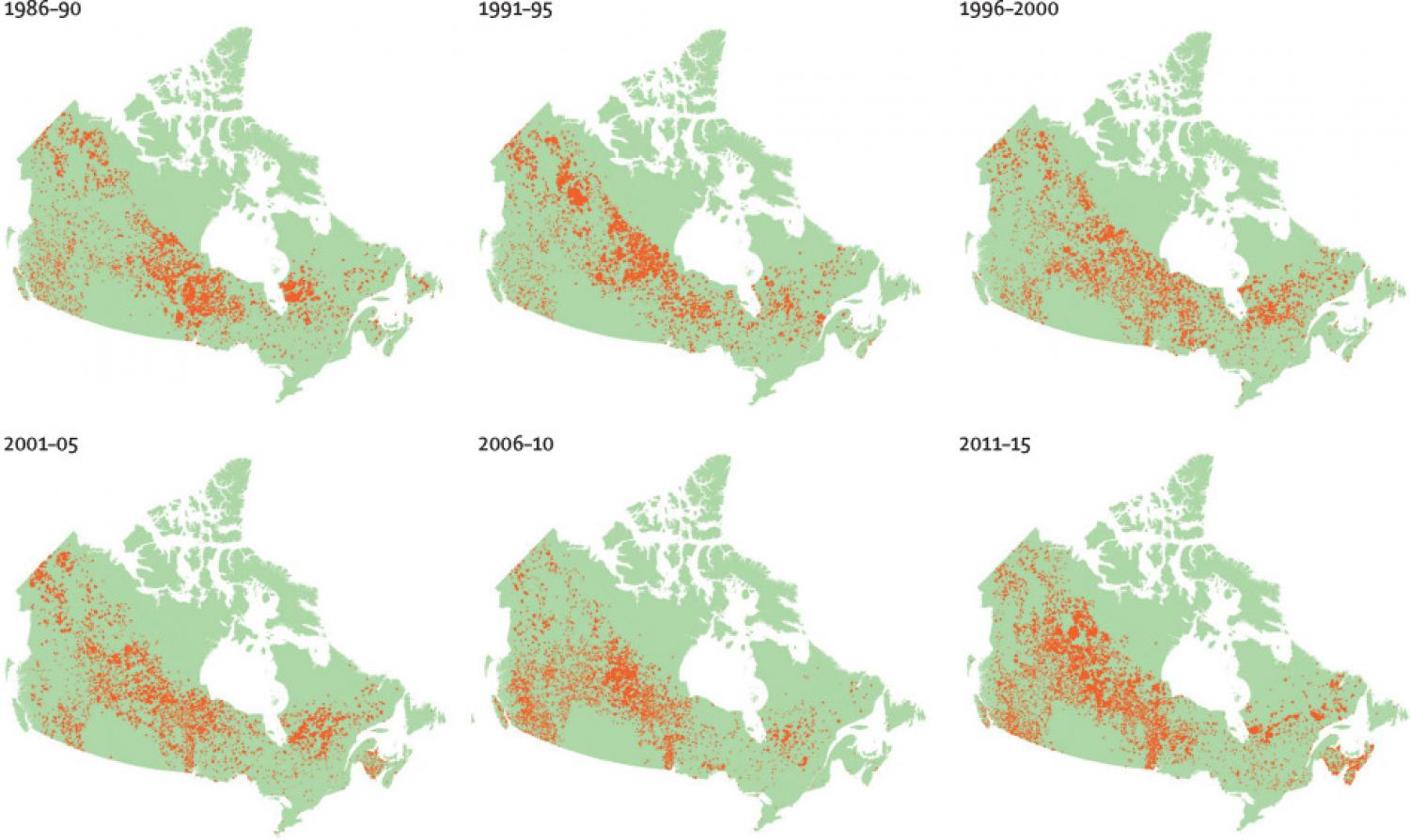 Wildfires emit many carcinogenic pollutants that contaminate air, water, terrestrial, and indoor environments. However, little is known about the relationship between exposure to wildfires and cancer risk. We aimed to assess the associations between residential exposure to wildfires and the incidence of several cancer outcomes (lung cancer, brain cancer, non-Hodgkin lymphoma, multiple myeloma, and leukaemia) in Canada.

We did a population-based observational cohort study of participants in the 1996 Canadian Census Health and Environment Cohort. The 1996 Canadian Census Health and Environment Cohort is a nationally representative sample of Canadian adults, followed up for cancer incidence and mortality from 1996 to 2015. For this analysis, we excluded participants who lived in major Canadian cities (with a population size greater than 1·5 million people), recent immigrants, and individuals younger than 25 years or 90 years of age or older at baseline. Exposures to wildfires were assigned on the basis of area burned within a 20 km or 50 km radius of residential locations and updated for annual residential mobility. Multivariable Cox proportional hazards models were used to estimate associations between exposure to wildfires and specific cancers associated with carcinogenic compounds released by wildfires, including lung and brain cancer, non-Hodgkin lymphoma, multiple myeloma, and leukaemia, adjusted for many personal and neighbourhood-level covariates.

Our analyses included more than 2 million people followed up for a median of 20 years, for a total of 34 million person-years. Wildfire exposure was associated with slightly increased incidence of lung cancer and brain tumours. For example, cohort members exposed to a wildfire within 50 km of residential locations in the past 10 years had a 4·9% relatively higher incidence (adjusted hazard ratio [HR] 1·049, 95% CI 1·028–1·071) of lung cancer than unexposed populations, and a 10% relatively higher incidence (adjusted HR 1·100, 1·026–1·179) of brain tumours. Similar associations were observed for the 20 km buffer size. Wildfires were not associated with haematological cancers in this study, and concentration-response trends were not readily apparent when area burned was modelled as a continuous variable.

Long-term exposure to wildfires might increase the risk of lung cancer and brain tumours. Further work is needed to develop long-term estimates of wildfire exposures that capture the complex mixture of environmental pollutants released during these events.