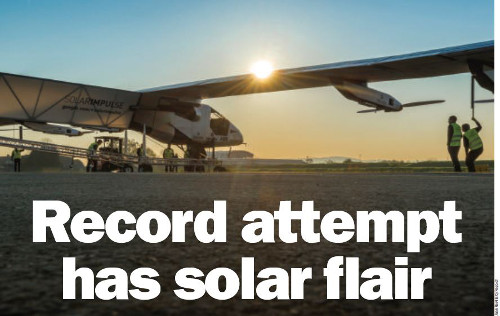 Soaring above an airbase in Payerne, Switzerland, one July morning in 2010, a solar powered aircraft was about to make history. Some 26 hours later, the prototype plane became the first to stay airborne both day and night using no fuel and producing no emissions.

Over 500 hours of flights – and eight FAI (Fédération aéronautique internationale) World Records – later, and the team behind Solar Impulse has since completed the construction of a second, larger plane and is counting down to its biggest challenge: circumnavigating the globe using only the power of the sun. Solar Impulse 2 was unveiled to the public on 9 April 2014 and took to the skies for its maiden flight on 2 June.

Getting such an ambitious project off the ground was certainly no easy undertaking, requiring innovative materials and the combined efforts of some of the world’s leading companies. Over the past decade, Swiss explorer Bertrand Piccard and engineer André Borschberg have steered a team of 50 engineers, 80 partners and around 100 advisors and suppliers in a bid to embark on the 35,000km flight around the world.

The journey started in 2003 when Piccard was invited to speak at an internal event for Belgian-headquartered chemical group Solvay. Born to a family of pioneers and adventurers, he talked of his successful round-the-world flight by air balloon a few years earlier. The record-breaking Orbiter 3 challenge had quite literally proven that the sky was the limit for flights of fancy, and affirmed his vision that a trip around the globe might be possible without expending fossil fuels.

The Solvay management team, inspired by his presentation, discussed the project’s potential and the Solar Impulse dream took off.

“If there is one word which defines this kind of project, it’s ‘inspiration’,” says Claude Michel, head of the Solvay Solar Impulse Partnership. “Our world is moving fast and there are many crises and difficulties but Solar Impulse gives the younger generation hope and a positive view on the future. When Bertrand had his vision, he had no solution, no resources, no funding and no team; he just had the strong will of saying ‘I will do it’. It proves that when you pull all your resources together you can really achieve the impossible.

“Chemistry was absolutely necessary to build this plane and this project is providing outstanding visibility – not only for Solvay, Bayer MaterialScience and all the partners but for chemistry as a whole,” says Michel. Solvay, one of four main partners supporting the project, has invested some 15m Swfr (€12.3m, $16.8m) into Solar Impulse these past ten years – and it has proven an extremely worthwhile investment, he adds.

“This is something the whole industry should be doing,” says Richard Northcote, head of sustainability at German polymer producer Bayer MaterialScience, an official partner on the project. “Solar Impulse has proven that companies working closely together can come up with even better solutions. Partnerships like this are really beneficial – and the industry should start to do more of that in terms of addressing the problems that society faces. I think by putting pressure on companies to come up with even better solutions than we appreciate today is a good thing – it drives innovation.

“There is always a danger that industry will stick its head in the sand instead of taking a more long term and therefore sustainable approach. There are alternatives to the way we look at technology today – we’re proving that this can be done,” he says. “We need to invest in alternative and renewable energies, look at lighter materials, and focus on sustainability.”

“The project and partnership is a flagship for innovation and sustainable development,”says Michel. “The values we have in our company are very similar to those carried by the Solar Impulse project: innovation, a pioneering spirit, respect for planet, and a respect for people. We are not just providing products for the project, we are providing solutions. As a technological partner we have been heavily involved in the co-development of the research; we have the technology, products and chemistry to help make the plane fly.”

Central to Piccard’s dream was changing people’s perception towards energy savings and renewables, and to prove that our dependency on fossil fuels could be reduced – all by harnessing existing technologies.

The key objectives for the team were to make the aircraft as light as possible while ensuring optimal performance and efficiency. The materials specified for the project were therefore integral to its success and required close collaboration between the many companies involved in its construction