Anti-Slavery Day: reflections on the increased risk of modern slavery

Modern slavery risks have risen across the world over the last year, including in 20 of the 28 member states of the European Union, according to the Modern Slavery Index 2017, an annual study by Verisk Maplecroft. Today, on Anti-Slavery Day, we look at the increased risks and numbers of victims of forced labour in supply chains, and how to mitigate these risks.

89 million people in slavery in the last five years

According the report, on any given day in 2016, an estimated 40.3 million people were victims of modern slavery across the world. Of these people, 24.9 million were in forced labour, with approximately 16 million people being victims of forced labour exploitation in the private sector (not including sexual exploitation). 57.6 percent of them were female and 42.4 percent male. On average, they were held 20.5 months before escaping or being freed from their situation of exploitation.

The breakdown of the sector in which the exploitation took place (among cases where the type of work was known): 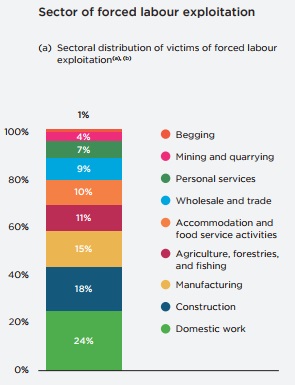 The recently published Modern Slavery Index 2017 assessed 198 countries for risk of modern slavery (including slavery, human trafficking and forced labour). The percentage of countries at "high" or "extreme" risk for modern slavery grew to 60 percent. This is a 2 percent increase since 2016.

Asian manufacturing hubs, Bangladesh, China, India, Indonesia, Malaysia, Myanmar, the Philippines and Thailand, all feature in the 'extreme' or 'high risk' categories. Although the report points out that some improvements have been made in India and Thailand.
Almost nearly three quarters of the 28 member states of the European Union were identified as having experienced an increased risk of modern slavery in the last year. The countries include EU's biggest economies Germany and the UK. These countries moved from the "low risk" category into the "medium risk" category of the index. 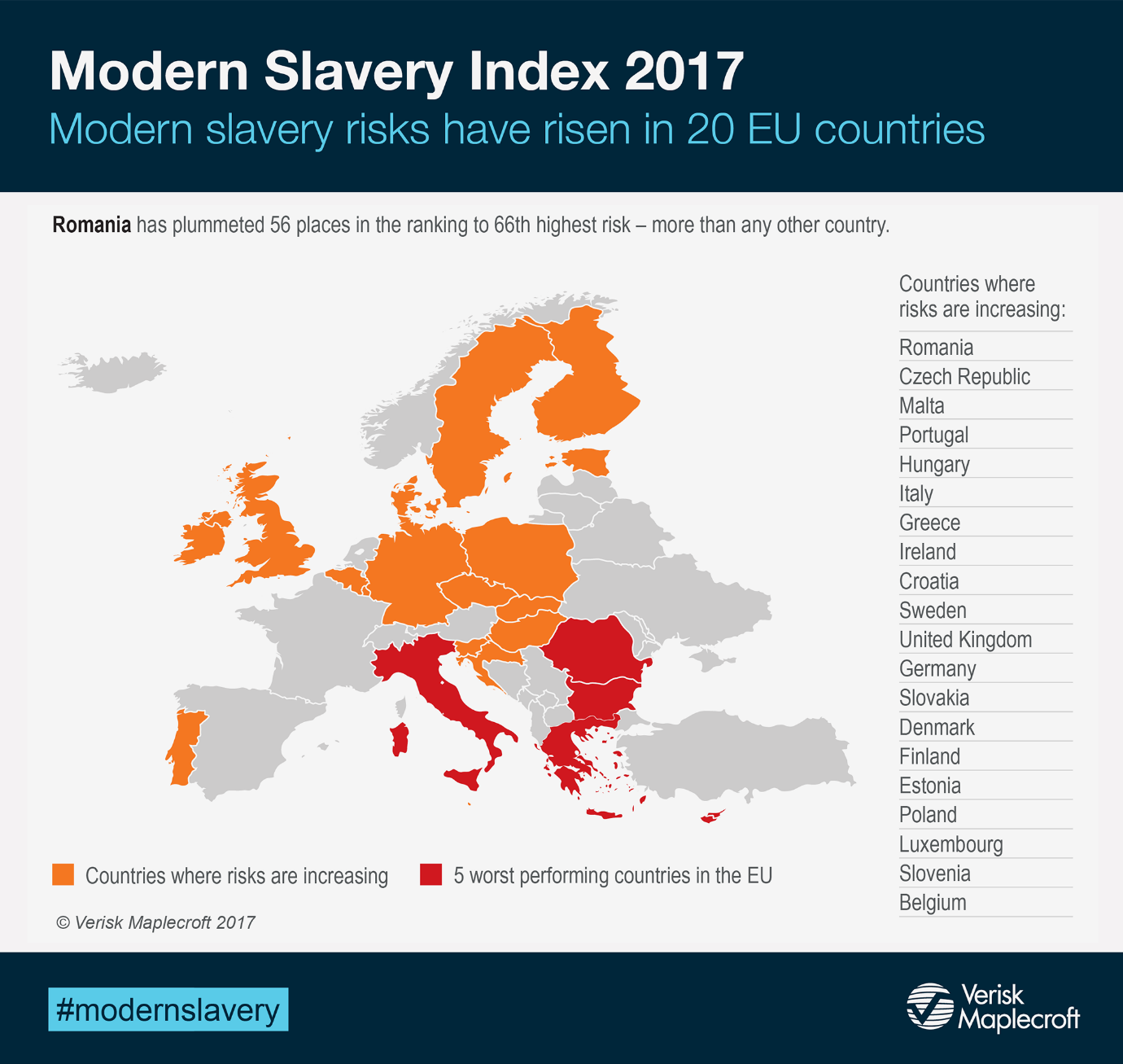 Changes in society can have an influence on the risks of modern slavery in supply chains as they can leave people vulnerable. These changes can be political, economic, social, technological, legal or environmental.

"The migrant crisis has increased the risk of slavery incidents appearing in company supply chains across Europe," said Sam Haynes, Senior Human Rights Analyst at Verisk Maplecroft. "It is no longer just the traditional sourcing hotspots in the emerging economies that businesses should pay attention to when risk assessing their suppliers and the commodities they source."

Risks have not only changed in Europe, Turkey for example showed a strong increased risk. This year Turkey was ranked 58th most at risk country ("high risk" category), whereas last year the country ranked 110th. The change in the country due to the influx of 100,000s of refugees from the Syrian war, in combination with Turkey's restrictive work permit system, has led to thousands becoming part of the informal workforce. Policing labour violations is also no longer a priority for the government, which is focused on the political crackdown, further adding to the risk, according to Verisk Maplecroft.

"The presence of these vulnerable migrant populations in the primary countries of arrival is a key contributor for increases in slavery across multiple sectors in the region, such as agriculture, construction and services," according to the report. These sectors are in line with the high-risk sectors as identified by the ILO and Walk Free Foundation.

Exploitative practices can for example include charging workers recruitment fees, providing false promises about or underpayment of salaries, or substandard working conditions. Employers or labour providers keep workers under these conditions by abusing their vulnerabilities such as immigration status, difficulties in changing employment linked to restrictive visa regimes, and/or debt bondage. Also, workers or their families might be subject to or threatened with physical abuse.

Initial steps for businesses to tackle modern slavery could include reviewing internal policies and processes, performing risk assessments of business sites, suppliers and third-party relations to identify the parts of its business that constitute a risk, and the development and rollout of an anti-slavery action plan. Robust due diligence of is a key step for businesses to mitigate risks when developing new supplier and third-party relations. However, as explained with changes in the world having an influence on vulnerabilities and risks regarding forced labour over time, ongoing monitoring is just as important for businesses too in order to ensure human rights are upheld and high standards are maintained in the long term.