To mark this year’s U.S. Independence Day, LexisNexis Legal & Professional has released new data for 98 countries indicating that the stronger a country’s rule of law, the greater it performs against measures of life expectancy, civil liberty, and happiness.

Some 241 years after the signing of the U.S. Declaration of Independence, where’s the best country to live for long life, liberty, and the pursuit of happiness – as set out by the Second Continental Congress on July 4, 1776?

The data is unambiguous. It’s Norway. 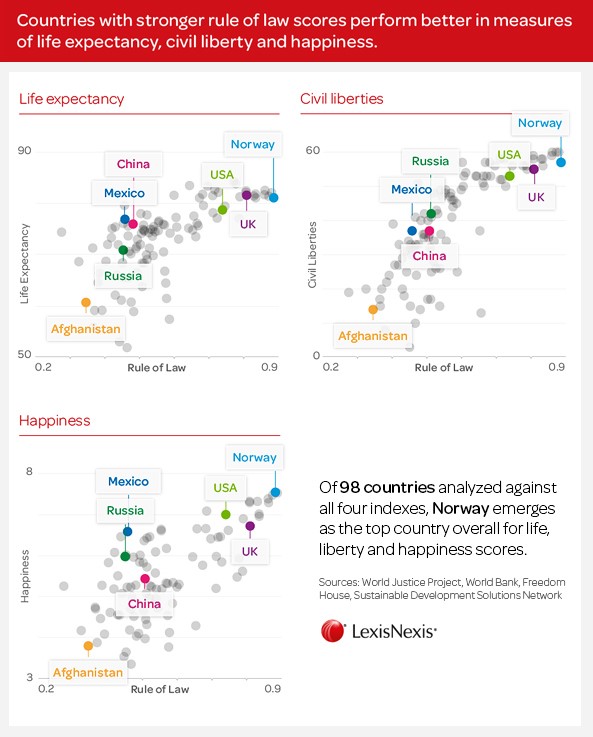 Norway ranks highest globally as the best country to live in through this lens, since Norway:

Comparatively, the U.S. averages 19th against countries reporting all measures. While it’s sitting in 14th place for happiness (and happier than the Germans and British in 16th and 19th places), the U.S. punches below its weight in terms of life expectancy. Its citizens can expect to live an average of 78 years, which compares to 82 years across the border in Canada. U.S. freedom score of 20th place lags countries like Chile and Spain, in 11th and 13th places.

"People tend to think of the rule of law as an abstract concept but the data tells a different story,” said Steve Carroll, VP of Customer Insights at LexisNexis Legal & Professional. “The rule of law has a material impact on us all. Legal infrastructures, supported by strong rule of law, are fundamental to building peaceful and prosperous societies where citizens can enjoy long life, liberty and the pursuit of happiness.”

RELX SDG Inspiration Day 2022: The Role of Businesses in Advancing Sustainable Development Goal 16
Environmental management—International Standard ISO 14001:2015
EUROSPINE and EANS statement about Putin's Ukraine war
Older people: forgotten victims amid the Ukrainian humanitarian disaster
Psychosocial impact of the War in Ukraine on pediatric cancer patients and their families receiving oncological care outside their country at the onset of hostilities