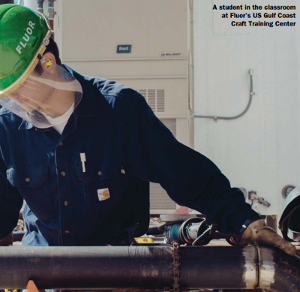 The US shale boom, strong economic growth and an aging workforce have set the stage for both high demand and a deficit of skilled labour in the US petrochemical industry. In reaction, industry groups have moved to create not only multiple solutions, but an organised formation to address the issue.

“We’re getting involved in partnering so we don’t duplicate each other’s efforts,” senior petrochemical advisor for AFPM Jim Cooper explains. “Everybody is taking a methodical approach to this.”

Over the last few years, industry organisations have called on a variety of methods to bolster the workforce, ranging from launching online resources, to creating stand-alone educational programmes and working with government and academic groups. The economy and the shale boom isn’t staying on ice, however.

“There’s still much of the $150bn worth of investment in process on the US Gulf Coast alone,” ZRG Partners’ managing director Andy Talkington says. “That certainly drives demand for the welders and other tradesmen.”

The National Association for Business Economics (NABE) is predicting US GDP growth of approximately 2.2% for 2017 after polling 52 analysts in its 2016 year-end outlook survey. Analysts surveyed identified infrastructure investment, US tax code reform and deregulation as factors that President Donald Trump could push to lift economic growth. Under the expectation of such conditions, the demand for skilled labour in multiple industries should only increase.

Cooper notes that for the construction trade, a shortage in general commercial workers could potentially occur in 2017. That’s one industry among several with which the petrochemical industry will have to compete. “We’re finding pretty similar circumstances unfortunately,” Cooper says. “But the silver lining here is, if we work together instead of trying to compete for numbers, we can change the mind of the nation.”