INSIGHT: Accelerating the transition to a more circular plastics economy

LONDON (ICIS)--A practical transition strategy for the different packaging applications that can be implemented rapidly and at scale was how one retailing executive described the plastics action plan launched by the Ellen MacArthur Foundation at the Davos meeting this year.

The report produced for the 2017 Davos meeting laid out an action plan to help drive the significant momentum that has gathered behind the campaign.

Photos circulating on Monday of a beach on Henderson Island in the Pacific Ocean provided yet more evidence of the detrimental impact that packaging and other plastics waste is having on the environment globally.

Nowhere, apparently, is removed from the impact of plastics trash which is not simply unsightly but a danger to marine and other forms of life. HuffPost (formerly The Huffington Post) reported that the uninhabited UNESCO World Heritage Site has “the highest density of anthropogenic debris recorded anywhere in the world, with plastic accounting for 99.8% of the pollution”.

“In 2016, the Ellen MacArthur Foundation provided for the first time what had long been lacking – a comprehensive, truly global perspective on plastics innovation needs at a societal level, and on the business opportunity for industry. 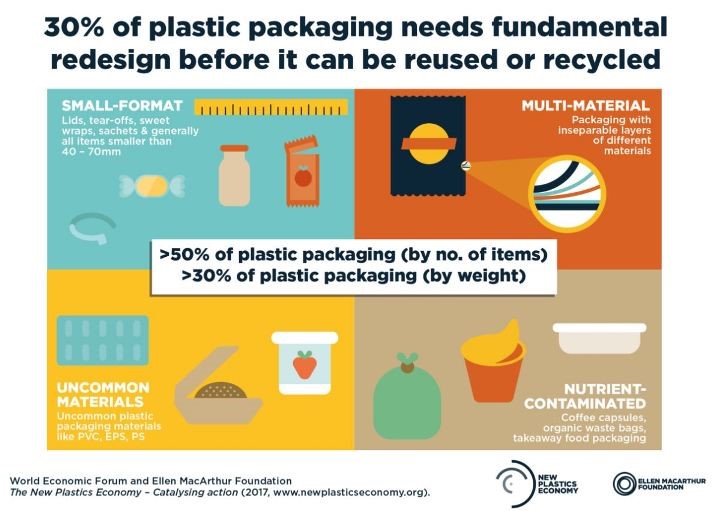 It is this evolution and revolution of, and in, plastics packaging that will change the way products are made and markets operate. “The future of plastics will depend on effective after-use, leakage reduction and decoupling from fossil feedstocks,” consultants Nexant said at the ICIS World Polyolefins conference in Berlin earlier this month.

Great change in the way plastics are used, consumed and recycled might be expected. These will shift polymer growth rates and introduce even more inter-polymer competition.

Creating a virtuous circle out of what, until now, has largely been a chain of production from feedstock to consumer will not be easy. But it is the innovation aspect that has fired the imagination of producers, processors and corporate consumers of plastics packaging.

A more circular plastics packaging economy can be achieved in a variety of ways, the Ellen MacArthur Foundation has shown and the transition requires a great deal of innovation. Currently, only 14% of plastics are collected for recycling, one-third ends up in the environment and 40% goes to landfill. This is an outrageous waste of materials and energy and an outrageous impact on the environment.

About 30% of the global plastics market by weight (and 50% by the number of items) needs fundamental re-design and innovation, the Foundation’s Sander Defruyt, said at an earlier ICIS polymers conference. About 20%of the total volume can be re-used while recycling needs to improve for the remainder.

“The majority of the transition [to a circular plastics economy] will come from businesses and industry but potentially from governments,” Defruyt said. “The consumer himself is an important player in the system…but he cannot throw his plastic in the right bin if the right bin is not there.” 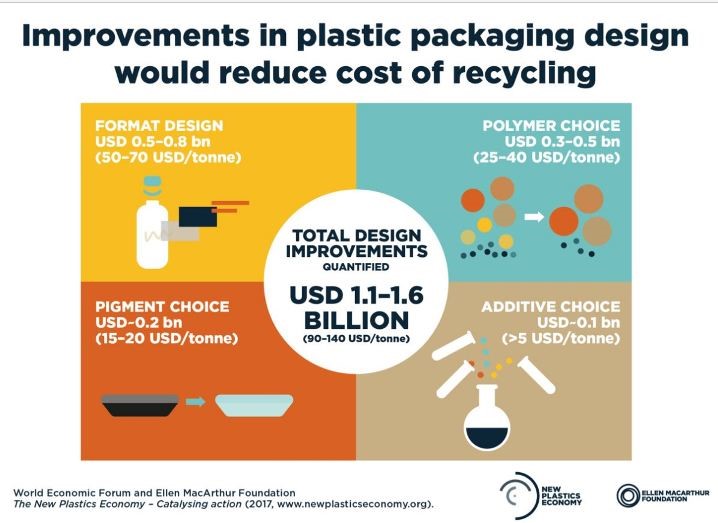 The Foundation says that, this year, it plans to build dialogue and take the next steps towards a 'global plastics protocol'. It is gathering further evidence on the socio-economic aspects of plastics in the seas, looking at packaging design, engaging stakeholders and launching innovation challenges.

“Through these actions, the New Plastics Economy initiative aims to set direction, inspire innovation and build momentum towards the vision of a plastics system that works, moving the plastics industry into a positive spiral of value capture, stronger economics and better environmental outcomes,” it adds.

The Foundation’s ideas have captured the attention of more than 40 companies and institutions linked in the plastics packaging chain.

BASF this month said it had become part of the Foundation’s New Plastics Economy and circular economy initiatives and would work closely with participants to help enable the transition to a circular economy for plastics “while ensuring that benefits such as food protection are upheld”.

Plastics packaging, of course, holds the key to better nutrition, a more secure water supply and a better standard of living for billions.

“The transition from a linear to a more circular economy can bring significant changes in business models and provide additional value across industries and to society,” BASF said. “The aim is to develop an attractive and viable alternative to today’s linear ‘take, make, dispose’ model. The chemical industry plays a pivotal role in this transition due to its innovation power.”

This is much more than better waste management.

“A smart circular economy concept has to be integrated within product development, production processes, use and re-use systems right from the beginning,” Said BASF’s vice president for sustainability strategy, Dirk Voeste.

Sustainability and the chemicals industry - the risk in delaying the inevitable
Leadership: Insights from Helen McGeough, Senior Analyst at ICIS
Reducing carbon emissions through water conservation: An analysis of 10 major U.S. cities
Strong direct and indirect influences of climate change on water yield confirmed by the Budyko framework
Human-environmental interaction with extreme hydrological events and climate change scenarios as background