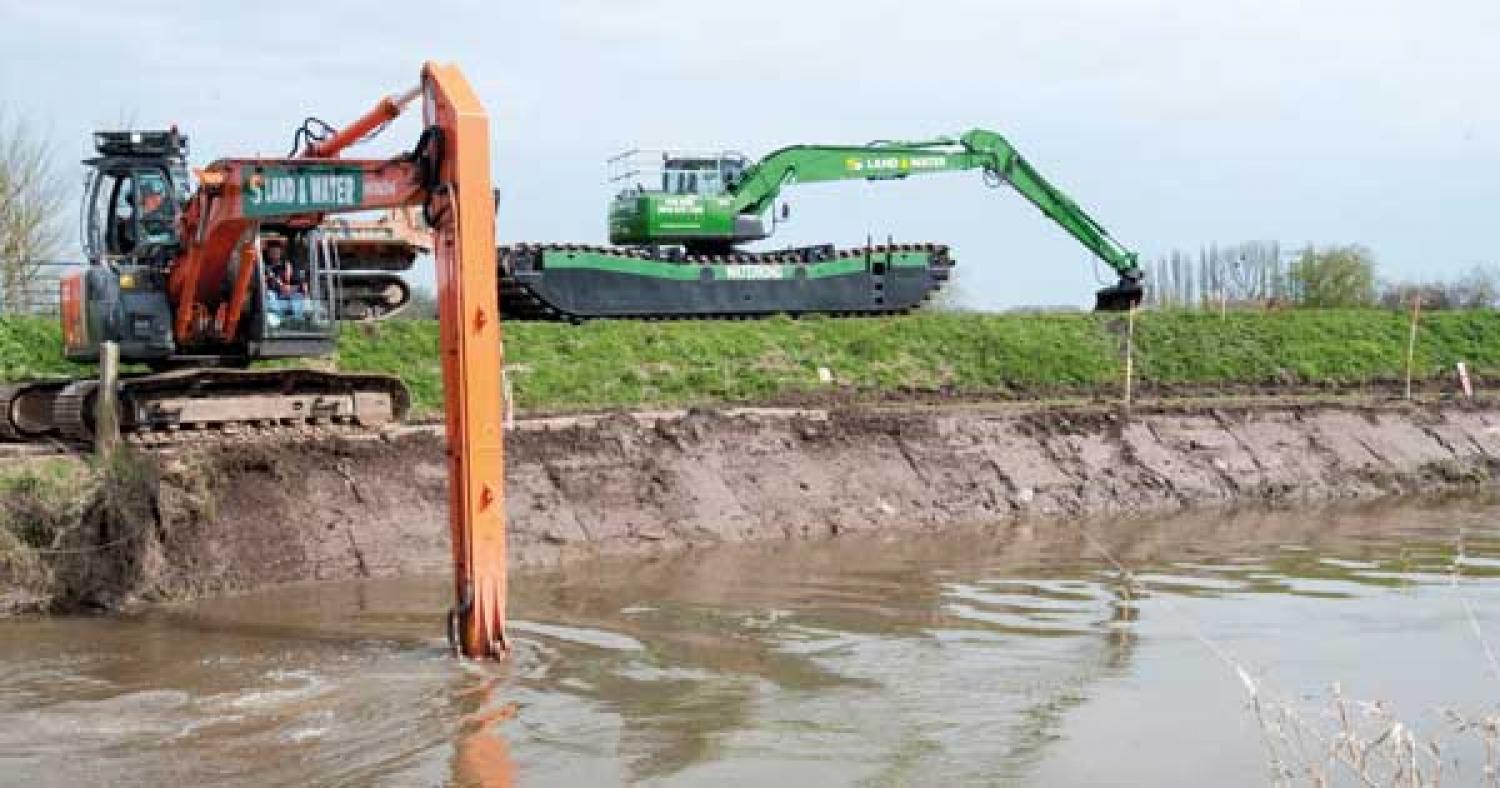 More farmers could take over flood-risk watercourse maintenance from the Environment Agency (EA), the government has suggested. It follows new guidance issued by Defra minister Therese Coffey, which could see more main rivers reclassified – or “de-mained” – as ordinary watercourses. At present, the EA usually undertakes maintenance, improvement and construction work on larger main rivers to manage flood risk. Smaller rivers and watercourses are usually looked after by local flood authorities, district councils and internal drainage boards – whose members include farmers.

Ms Coffey said the guidance sets out how de-maining should take place – where there were agreed benefits – taking into account the wishes of local communities. De-maining has been successfully trialled since last year in four pilot areas – in Kent, Norfolk, Suffolk and Lincolnshire.

“Consultations on transferring these watercourses will happen in January,” Ms Coffey told the Association of Drainage Authorities’ annual conference in London on 16 November. “The intention is that de-maining watercourses will start in summer 2018,” she said.

Farmers have long argued they should be able to have more say in the way rivers are maintained – blaming the EA in some cases for failing to prevent floods. Some 86% of Grade 1 farmland is within areas covered by internal drainage boards. Describing the boards as “unsung heroes” in terms of mitigating flood risk, Ms Coffey said they should play a central role in whole catchment management. A number of other internal drainage boards around the country are keen to take on responsibility for watercourse maintenance from the EA, she added. “We will look at these areas closely following the pilots,” said Ms Coffey. She acknowledged concern from delegates the EA shouldn’t hand over responsibility for rivers that had been neglected or were in a poor state.

It was important any transfer of responsibility or de-maining is done in a fair manner and the agency doesn’t pass on a poorly maintained river that isn’t fit for purpose. “It is not the case that internal drainage boards should take on watercourses and just become a subcontractor – that is not the relationship I am looking for,” she added.

EA chief executive James Bevan said the agency wants to work constructively with internal drainage boards. Water management - and ensuring an adequate supply for everyone - was one of the biggest challenges being faced by the UK, he said. “We are keen to identify other opportunities where we might de-main,” said Sir James. “The cardinal principle is achieving mutual consent.”

Dredging rivers remains an important way of reducing flood risk to farmland – but is not always appropriate or effective, he added. “I am in favour of dredging – I am in favour of doing it where it makes a difference to flood-risk and where it is value for money,” said Sir James. Last year, the agency spent £22m on dredging up and down the country, he added. “We will make decisions about when and where to do it on a case by case basis and we will do it working with you and where it will make a big difference.”

Lack of dredging was widely blamed by farmers for exacerbating the impact of the Somerset floods during the winter of 2013-14. The EA subsequently committed to dredging the River Parrett. Tony Bradford, of the Parrett internal drainage board, told the ADA conference it was important rivers were kept well maintained. Rather than a lack of dredging, climate change was a major cause of flooding, said Sir James. “Dredging, building walls – none of these things are 100% guaranteed [to work] against flooding. We can reduce flood risk, including by maintaining rivers properly, but we can never eliminate it.”

Organic farmer Karen Thomas is helping to reduce the risk of coastal flooding in Suffolk. Ms Thomas is project manager for the Water Management Alliance (WMA), which is working to reduce coastal flood risk on a section of Suffolk’s River Deben estuary. She also manages a herd of South Devon cows at Kelsale, near Saxmundham, and sells beef direct to Marks & Spencer. The community-led water management scheme – introduced following the 2013 tidal surge – is just one success delivered by the WMA, which works on behalf of the Norfolk Rivers, Norfolk Broads and East Suffolk internal drainage boards. Described by the Environment Agency as worse than the floods of 1953, the tidal surge reached a height of 3.1m, and breached the then 2.7m high defences. Floodwater levels reached 1.5m in some of the 18 homes and businesses affected, says Ms Thomas.

“The flooding galvanised the community into action, leading a group of voluntary residents and business men and women affected by the flooding to create the Waldringfield Flood Defence Group, which has since helped to dramatically reduce the risk of flooding from the area.” The group successfully bid for £640,000 of coastal community funding for the project, which was added to contributions from local residents and partner organisations. The plan was to reduce the risk of flooding from a probability of once in five years to once a century. This involved the construction of new 3.8m high-flood defence walls and a series of gates and removable sections to allow sufficient access for launching and retrieving boats, as well as general access to vessels secured on the quayside.

Protecting farms and villages in Nottinghamshire

Nottinghamshire farmer Will Staunton manages almost 500 miles of watercourses while looking after 400ha of arable crops – protecting people, property and land from flooding as well as producing food. Mr Staunton is chairman of the Trent Valley internal drainage board (IDB), which manages watercourses covers an area of low-lying land from the west of Gainsborough, straddling the River Trent and its tributaries, down to the south of Nottingham, a total of 44,093ha. Following in his great-grandfather’s footsteps, Mr Staunton’s role sees him responsible for maintaining pumping stations and drainage channels to ensure the safety of local residents, farm-land and businesses, while greatly reducing the risk of flooding.

The farmer and landowner oversees an executive board responsible for the 14-strong team maintaining 486 miles of watercourses, as well as operating and managing 18 pumping stations across the low-lying fen and valley areas. Mr Staunton combines his work with the IDB with his “day job”, as the managing partner of a 400ha arable and grassland family farm in Nottinghamshire. The farm on the edge of the vale of Belvoir grows wheat, spring barley and oilseed rape, with 100ha of grassland. The land requires good drainage, says Mr Staunton – one of the reasons for joining the IDB. “I also wanted to give something back to the community, learn something, and help manage water levels for the benefit of everyone living and working in the area. “Although not many people know this, IDBs have been active in rural communities for many centuries, and they continue to play an important role in communities to manage water levels to reduce the risk from flooding.”