A Doughnut for the Anthropocene: humanity's compass in the 21st century 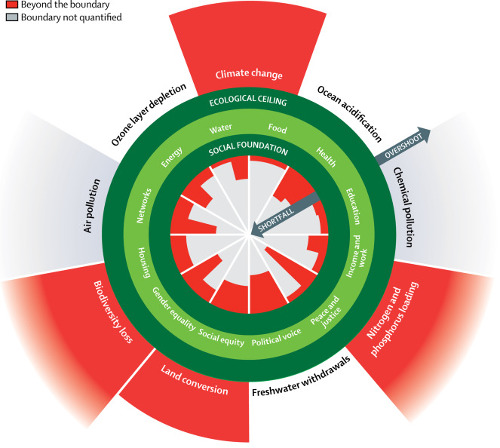 A new model of human wellbeing is emerging to guide humanity in the Anthropocene. In essence, it recognises that wellbeing depends on enabling every person to lead a life of dignity and opportunity, while safeguarding the integrity of Earth's life-supporting systems. The conceptual framework of social and planetary boundaries—which has come to be known as the Doughnut—contributes to this paradigm by concisely visualising its ambition (appendix), and so providing a compass for humanity's 21st century progress.

Since I created the Doughnut at Oxfam in 2012, it has been widely applied within academia, policymaking, progressive business, urban planning, and civil society as a tool for reconceptualising sustainable development. Here I present a renewed and strengthened framework, based on recent advances in both internationally agreed social standards and in Earth-system science, which respectively provide the basis for establishing the Doughnut's social and ecological boundaries.

The Doughnut combines two concentric radar charts to depict the two boundaries—social and ecological—that together encompass human wellbeing (figure). The inner boundary is a social foundation, below which lie shortfalls in wellbeing, such as hunger, ill health, illiteracy, and energy poverty. Its twelve dimensions and their illustrative indicators are derived from internationally agreed minimum standards for human wellbeing, as established in 2015 by the Sustainable Development Goals adopted by all member states of the United Nations.

Toilets for education: Evidence from Kenya’s primary school-level data
New Laws to Watch Promoting Workplace Diversity
Caregiving within and beyond the family is associated with lower mortality for the caregiver: A prospective study
Running as a Key Lifestyle Medicine for Longevity
Girl Talk: A Smartphone Application to Teach Sexual Health Education to Adolescent Girls